The calculus of caffeine consumption

Considering the huge role that caffeine can play in enhancing (workplace) productivity, it is worthwhile to study its effects and mechanism with the hope of maximizing this productivity-enhancing effect. I've done the legwork for you, so sit back and read. The results might surprise you. 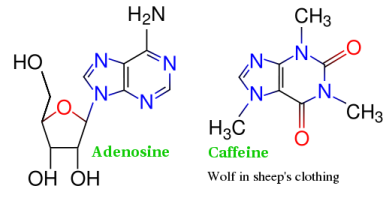 Mechanism. Caffeine has a number of effects on the body, but the one that is relevant here is that it blocks adenosine receptors in the brain (by tricking your brain into thinking it is adenosine.) A decrease in the activity of adenosine (which is a sleep chemical) increases neuron firing rate and increases focus and concentration.

Caffeine tolerance builds up rather quickly (2-3 weeks) and further, is near-total. That means that if you drink coffee regularly, pretty soon you start producing more adenosine in respose; thus you need your caffeine dose just to get up to your normal level of brain activity, and you're dopey if you don't take it. Another way to think about it is that the time-average of adenosine level (and hence, attention level) tends to stay more-or-less constant, both short term and long term.

Short term strategy. Let us examine the way that most people take caffeine -- when they feel sleepy (I will call this antagonistic consumption.) This changes the attention level from the green line to the blue line (i.e, it smooths out the fluctuations.) This works great for many people (say, someone that has a data entry job), because maximum productivity is limited by external constraints. Other jobs where antagonistic consumption is essential include assembly line worker and truck driver, where mistakes can be disastrous but there is little to be gained from peak concentration.

But other jobs, often characterized by a low level of repetition, have a markedly different attention-productivity curve. Academic research, for instance, involves generating ideas that no one has come up with before. Clearly, an idea that advances the state of the art is unlikely to occur except when attention level peaks. If you spend your entire day doing nothing, but all that doing nothing somehow enables you to reach a point where you understand your research problem well enough that you get insights that no one ever did before, then that's good research. Writers are another example: it is common to sit around for days or weeks waiting for inspiration to hit ("writer's block").

What is common to these tasks is that progress happens in spurts, due to the fact that they involve frequent cognitive bottlenecks. A cognitive bottleneck can only be overcome when attention level exceeds a task dependent, typically very high threshold. Clearly, then, antagonistic caffeine consumption results in worse-than-normal productivity, because it flattens the attention level curve and decreases the fraction of time spent at peak attention level. Instead, reinforcing consumption helps maximize productivity (the red line). According to this strategy, the best time to drink coffee is when you are already very alert.

A job like driving trucks is one end of the spectrum, where productivity is naturally and insuperably rate-limited. Jobs with frequent cognitive bottlenecks like at the other end. In each of these cases, the optimal pattern of caffeine consumption is clear. Most other jobs fall somewhere in between, and each person must make a reasoned decision about what works best for them.

Sleep. The reinforcement strategy has another element to it. When adenosine peaks, the best response is not to fight it, but "go with the flow" and (shock, gasp) sleep.  Sleep has effects on memory consolidation and is extremely beneficial in overcoming cognitive bottlenecks, making the brain maximally alert right after waking up. Thus, a possibly very effective coffee drinking pattern would be two cups a day, one early in the morning and one right after an afternoon nap. (Unfortunately, napping is stigmatized in the Western work culture, despite much scientific evidence touting the benefits. I hear that such stigmatization is non-existent in China. Good for them.)

Long term strategy. Over the long term, consistent caffeine consumption is as good as nonconsumption, because of (you guessed it) tolerance. Is there a better strategy? Of course there is. Periodic abstinence lets adenosine levels return to normal. With complete abstinence, it takes 5 days to reach adenosine normality; conservatively, and with imperfect abstinence, a week or 10 days may be required. (Quitting is hard!) For most people, work involves a natural cyclic pattern of crunches and lean periods, and  moderated coffee consumption to reflect this pattern will let you enjoy its cognition-enhancing effects more-or-less permanently.

1. Many products contain caffeine, especially sodas. Carelessness about extraneous caffeine sources will diminish the effect that well-planned coffee-drinking can have. (Of course, the sugar in sodas is far more harmful than the caffeine, so that would probably be the least of your worries.)

2. Personally, since I discovered these principles 6-8 months ago, I've had an absolutely unbelievable time in terms of research productivity. I've also had 3-4 quitting cycles in this time period (which is less than ideal, but I didn't realize the importance of quitting until later.)

3. There appears to be a generally low awareness of cognition-enhancing substances in general, such as creatine. I plan to expand on this in a later essay.

4. This essay (and everything else I write on this blog, unless otherwise stated), is licensed under CC-by-SA.